This post shows how easy you can build a fuzzer for the MQTT protocol by using the Polymorph framework.

I will start by assuming that the reader knows the MQTT protocol. For those who do not know it, you can find more information here.

The first thing we will do is prepare the environment where we will perform the fuzzing, in this case, it will be very simple, a Kali Linux machine in which we will install the following dependencies:

With all this installed, we are ready to start!

Before starting the construction of the fuzzer, we are going to test our mosquitto installation in localhost. To do this, we are going to open two terminals and execute a client that is going to publish to a certain topic and another in which we will run the mosquito broker. In the following image you can see the commands and the result.

Well, now that we have tested the communication between both clients, we are going to open Polymorph and begin with the capture and modification of MQTT packets in real time.

In our particular case, we are going to fuzz the topic field of the MQTTPublish packets, notice that the modification of any other field would be done in exactly the same way. Also, for simplicity, we are going to modify MQTT packets that implement the IPv4 protocol. Sometimes you will see that Polymorph captures the MQTT protocol over IPv6, to temporarily disable IPv6 you can use the following command over the loopback interface:

Having said that, we are going to access the Polymorph main interface, to do that, we only have to introduce the polymorph command from a Linux terminal.

Once here, let's start with the construction of the fuzzer. As in this case we will not need to intercept the communication between two machines because the client and the broker will be in localhost, we do not need to use any spoofing technique. We can simply use the capture command to start the packet sniffing process.

Our goal at this point is to capture one of the packets that we want to modify, so that the framework converts it into a template and we can work on it. Therefore, while the tool is sniffing packets, we place ourselves in our MQTT client and send an MQTTPublish message to the broker.

Once this is done, we use Ctr-C to finish the sniffing process in Polymorph and use the show command to show the captured packets on the screen. 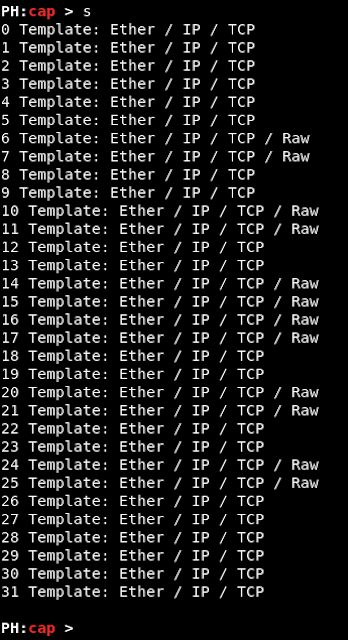 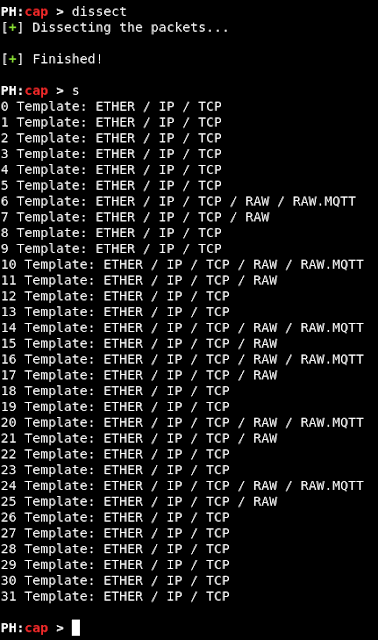 Now that we have a more concrete representation of all the bytes of the packets that we have captured, what we must do is choose the template that corresponds to the packet that we want to modify. We can use the wireshark command to open this application and perform a more detailed filtering. Once the template is selected, we access it using the template command.

Right now, we are in the context of the selected template. With the show command we can see the different layers and fields that it has, as well as the type of them. The template concept is the most important abstraction of the framework, and it is what allows the user to access the captured packets in real time using simple syntax in the code he writes to perform complex processing on them. Furthermore, it is the container in which all the conditional functions and structures of the framework are stored when we save a session.

At this point, the conditional functions come into play (preconditions, postconditions and executions). When the user enters the intercept command in the template interface, the machine that hosts Polymorph will stop forwarding the packets at the kernel level and start sending those packets to the tool to be processed before being forwarded. The conditional functions defined by the user will be executed in each of the intercepted packets.

Let's see a simple example of how these functions work, we are going to add the following precondition to our current template using the command:

If you are using the default editor, pico, remember not to mix tabs and spaces, better use only spaces to indent the code. (You can specify another editor that is in your PATH using the option -e):

Enter "y" to keep the code on disk and enter precs -s to visualize the added precondition.

Now, introduce the intercept command with the next iptables rule (by default the framework will set a forward rule):

Look how all the packets that flow through the machine are processed in real time by the tool, and the precondition we have added is executed on each of them. We can test it just by sending a MQTTPublish message from one MQTT client to the other.

The conditional functions are another important abstraction of the framework and work as follows: when a packet is intercepted in real time, the conditional functions defined by the user are executed on it following a certain order, first the preconditions are executed in the order in which the user has added them to the template, then the executions and finally the postconditions. If at any point of the execution of any of the three types of conditional functions the value None is returned by one of them, the execution chain is broken and the packet is forwarded as it is at that moment. On the other hand, if the packet that is received as an argument is returned, the chain of execution of conditions continues. Remember that the packet that is received as argument is the packet that has been intercepted in real time at that moment.

Once this is understood, we are going to exit the intercept mode in Polymorph by entering Ctr-C (in this way, the machine that hosts Polymorph only forwards the packets without passing them through the conditional functions). After that, we are going to add the following preconditions, executions and postconditions, which, I insist, when we start intercepting will be executed on each of the packets that are intercepted in real time. To eliminate the test precondition function that we added before, use:

Two preconditions have been added using the commands:

The first precondition, global_vars, is creating a global variable that will remain constant for all intercepted packets. It will be used to store all the test cases that we will use to fuzz the MQTTPublish packets.

On the other hand, the second precondition, filter_mqttpublish, will filter the incoming packets so that they only continue executing the rest of the conditional functions those whose msgtype field is equals to 48. Notice that thanks to the template abstraction, Polymorph knows the position that the msgtype field occupies within the bytes of the intercepted packet, and therefore, the user can access it much more easily.

We are going to add one execution function. The piece of code shown below performs the following tasks:

That's all we need to build a Proxy Fuzzer for the MQTT protocol using Polymorph!

To execute it, we will create two directories in the PATH from which we have run Polymorph, one called valid_cases and another called fuzz_cases. These directories will be used by Radamsa to read valid test cases and mutate them in new cases that may unravel in a possible vulnerability. We can add some simple valid cases like the following ones.

Once this is done we simply go to the template interface in Polymorph and enter the command:

After that, we go to our MQTT client and publish a message, preferably with a long value so that there are no problems with the sequence numbers of the TCP/IP session. 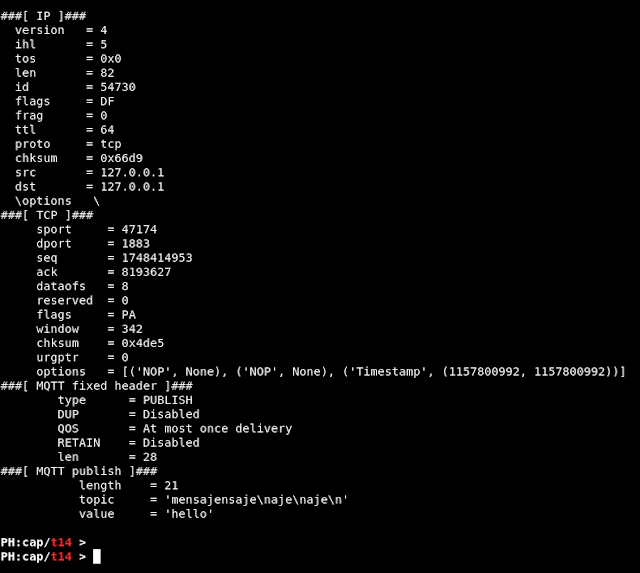 We can observe how the packet is modified in real time and the value produced by Radamsa is introduced. What we could do now is making a simple loop in Bash and let it test a significant number of test values. Also, the most common thing would be that we run the application that we are testing under a debugger, so we can capture the exceptions that occur and analyze them.

Finally, we can use the save command from the template interface to export the template and import it into Polymorph in another machine, so you can share it with your colleagues!